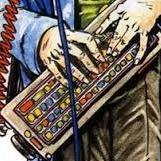 Basic specs - does this make sense?

5 posts in this topic